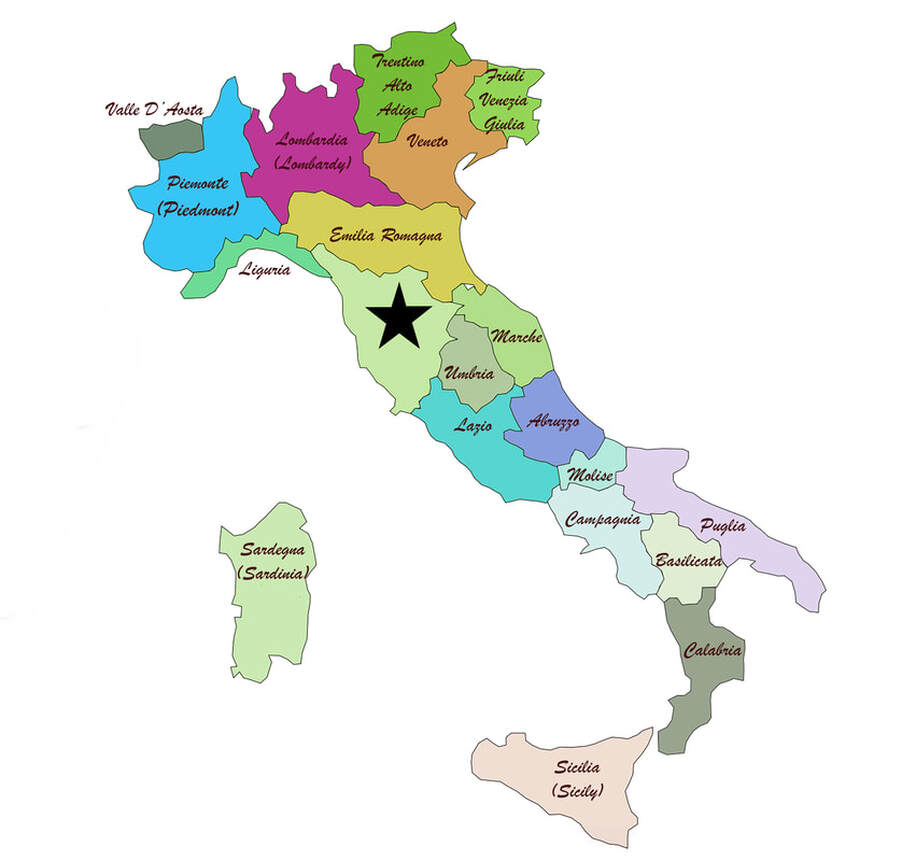 Characteristics:  Crisp acidity, with ripe and leafy citrus -driven fruit. Medium intensity and aromas and flavors of white flowers, golden apple, stone, honey and almonds.
​​
Serve: Chilled
​
Vernaccia is grown and produced into wines all over the peninsula but they lack consistency in character.  The most well known is the racy and very popular white wine of San Gimignano.  The walled city of San Gimignano is famous for its multiple towers and a popular tourist destination.  The Vernaccia di San Gimignano has developed a reputation there as a reliable, good quality wine that pairs well with local foods and has the attention of the visitors.

The earliest known reference to this grape reaches back to the late 1200s when Vernaccia and Greco wines were celebrated in local tax documents.  Later, cellar managers of Pope Paulo III in the 1600s referred to the high quality and partially sweet Vernaccia or Vernacce wines of Toscana.  DNA research ties the grape to this region and differentiates it from other Vernaccia named grapes.  Some research shows that the grape may have migrated originally from Liguria and introduced from Greece or Spain but the general belief is that the grape originated in the hills of San Gimignano.

The grape is mid to late ripening and is very vigorous in the vineyard.  The yields are high and wines are often acceptable to good quality on the market.  Careful vineyard and winemaking practices are elevating the overall quality levels. Soils are mostly sandstone.

The wines were traditionally fermented and produced in the same manner as red grapes, with extended skin contact in large wooden botti.  The wines easily oxidized and had deep golden colors.  Starting in the 1980s, modern practices were introduced and winemaking moved to stainless steel, temperature controlled fermentation and careful methods to reduce oxidation.  The wines are now clean and light and made in varietal form (>85% Vernaccia).  Riserva styles add complexity with small oak barrel fermentation and aging.

The most common style of Vernaccia di San Gimignano are crisp, refreshing and light with citrus flavors and floral notes.  There is an underlying mineral tone to the wines and a very typical almond-bitter finish.  Vernaccia does see many different winemaking approaches and the wines are considered to lack a specific style and consistency.

Vernaccia di Serrapetrona DOCG in Marche is a DOCG associated with the production of red wines made from the Vernaccia Nera variety.
Producer/Theme websites:
Proudly powered by Weebly