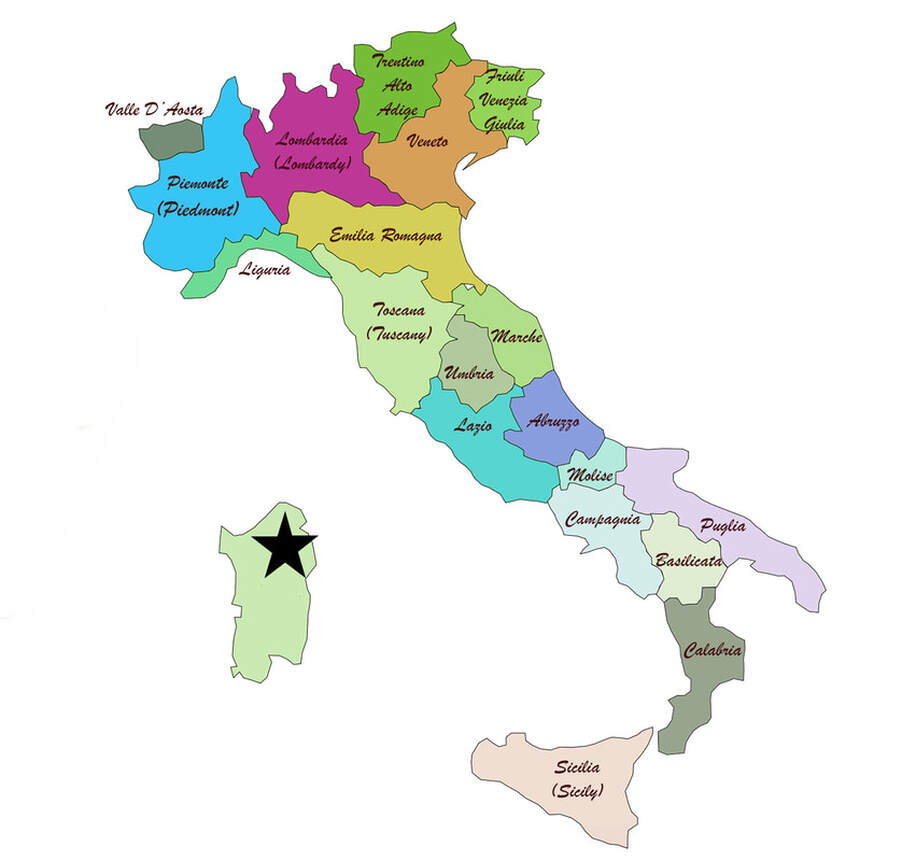 Region:  Sardegna - Sardinia / Tuscany and Liguria
Quality Level in EU/Italian Wine Law: Vermentino di Gallura DOCG
Established: DOC approval was given in 1975 and elevated to DOCG status in 1996.  1200 hectares dedicated to the production of 370,000 cases of wine annually.

Primary Grape Varieties and Wine Styles:  Varietal 95% Vermentino used in Still, Sparkling, Late Harvest and Passito wines.  Maximum elevations of 500 meters for all production.  Passito wines are based on dried grapes, both on and off the vine, to achieve a 15.5% minimum potential alcohol level.  Sparkling versions can be produced either in tank or traditional methods and often come in both frizzante and spumante versions. A minimum of 9 months on lees is required for Metodo Classico sparklers. Vermentino is also known as Favorite in Piemonte, Furmentin in Piemonte, and Pigato in Liguria. It is also the same variety that produces in Southwest France under the name of Rolle.

Characteristics: Vermentino is a crisp, high acid wine that performs well near the sea.  Likely to have been grown initially in the Piemonte region it is now well established in Sardinia, Tuscany and Liguria with the leading examples

Vermentino is also known as Rolle in France and it is an important grape in Sardinian white wines as well as in Liguria.
Vermentino is early budding and therefore will face a frost risk in colder and continental climates.  It is relatively thick skinned and therefore it is disease resistant but can suffer from Powdery Mildew.  Vermentino prefers exposed sites with wind to reduce disease pressure such as the northern section of Sardinia.  Vermentino is susceptible to the European grape moth.

Vermentino is a Mid-season ripening grape and harvest will avoids fall rains that could dilute the grapes. Along with the exposed sites, Vermentino also does well in poor fertility soils which limit vigor, create lower yields and more intensity in the resulting wines
Vermentino wines have medium intensity lemon, lime, and white blossom aromas Riper examples can show tropical fruit.

Light to med - body, medium alcohol, med + acid and typically good to very good in quality.  In my experience, there is also an herbal tone, leafiness, sea spray, wet stone, and melon notes.

Vermentino wines are made with a gentle press and often with 24-hours of skin contact to extract flavor.  Fermented at mid temperatures in SS to preserve fruity characters and aged for 3-4 months in neutral vessels on lees for texture.  The better examples may see 6 months of lees contact for more texture in a protective environment to maintain delicate, fruity aromas.
In Sardinia, there is a DOCG and DOC that covers Vermentino with Vermentino de Gallura providing the best examples from Northern sections of the island.  It has restricted yields that are 50% of the overall DOC that covers the whole island – Vermentino di Sardinia DOC.

The DOCG region of Vermentino di Gallura is found on the northern parts of the large island and represents the only DOCG region of Sardinia. There are IGT and DOC but no other DOCGs.

​The DOCG regulations require the wine to be at least 95% Vermentino with a minimum alcohol level of 12%.  Vines that are harvested later with wines that can reach 13% alcohol, can and are usually labeled and sold as Superiore.   The wine is mildly aromatic and some people say it can have a hint of marijuana in the aroma (others call it oregano).  It has slight peachy tones with a lemon acidity that gives it a nice structure. It has a slight grainy structure that is similar to Chenin Blanc and a nice salinity in the finish.  The wine is harvested early to retain the high acidity sought for lively and fresh wines.

As we work our way down the island into the Vermentino di Sardegna DOC region, the required percentage of Vermentino drops to 85% - still a varietal wine with similar characteristics. Across the island, Vermentino can be found in other forms including nice sparkling versions and frizzante versions in both dry and sweet versions.

In Tuscany, Vermentino is becoming an increasingly more influential grape variety and can be found in white blends or in varietal wines such as the wine we have here.  The Tuscan versions exhibit similar characteristics.

This region of Liguria is considered to be the initial area of Italy to receive a Malvasian derivative variety from Spain, sometime in the 14th century.  In Liguria, the grape is named Pigato and sometime near the end of the 19th century, the variety arrived in Sardinia where if found its ideal home.  In the northern end of Sardinia, the granite-based soils and the vicinity to oceanic effects create a steely, crisp wine with an attractive bitter note.

Taken as a whole, the finest version of these wines is the Vermentino di Gallura.  It creates an immediate memory of the Ligurian sea and takes me back to the first glass I had in Nervi but with a higher level of elegance and fluidity.  I can imagine sharing this wine over an antipasto plate and with a full meal.  It is a pleasant wine that hints at the versatility but leaves me with a real statement that it represents a unique Italian wine with a lot to say.

Vermentino is mid ripening and clearly benefits with seaside influences.  It is an early budding variety and is susceptible to spring frost.  Vicinity to the sea helps reduce the risk.  Grape moths are fond of Vermentino and it can suffer from Downy Mildew.  The wine that is produced with Vermentino grape is intensely aromatic.  This is particularly true in Sardinia and Liguria.  The Rolle grape of southeast France is genetically identical to Vermentino and is widely planted and used in Provence and Corsican wines.

The acidity is lively and the wines have much character.  They can be rich and full on occasion but expect a mid weighted wine. 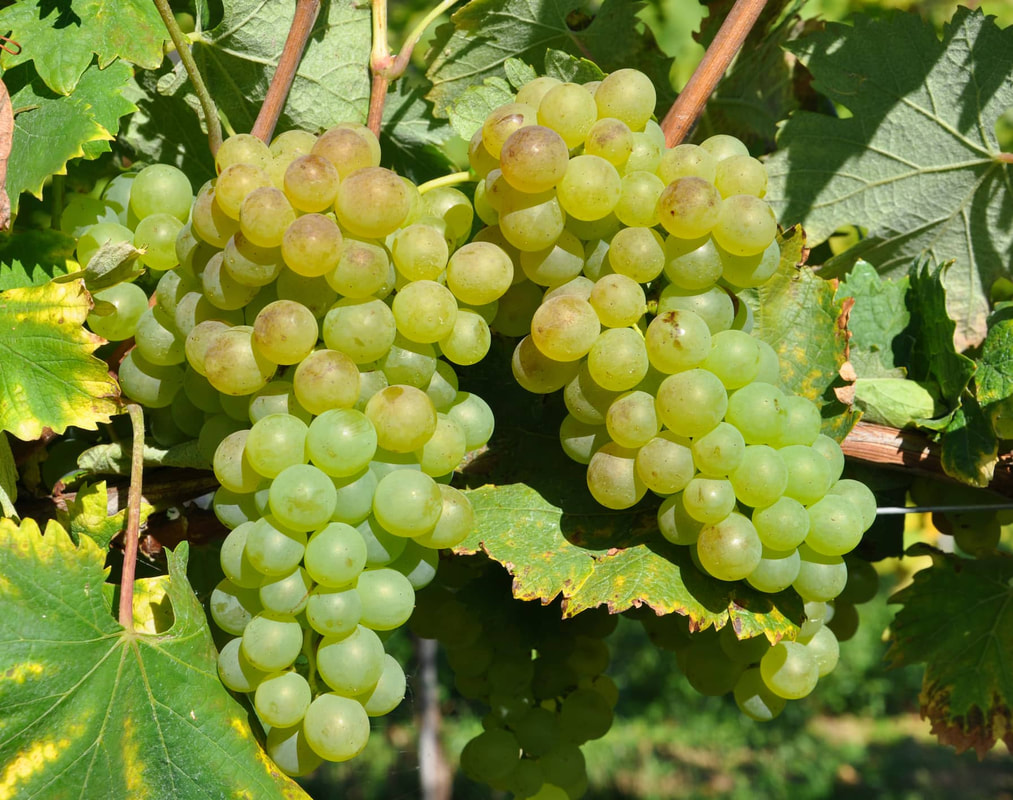