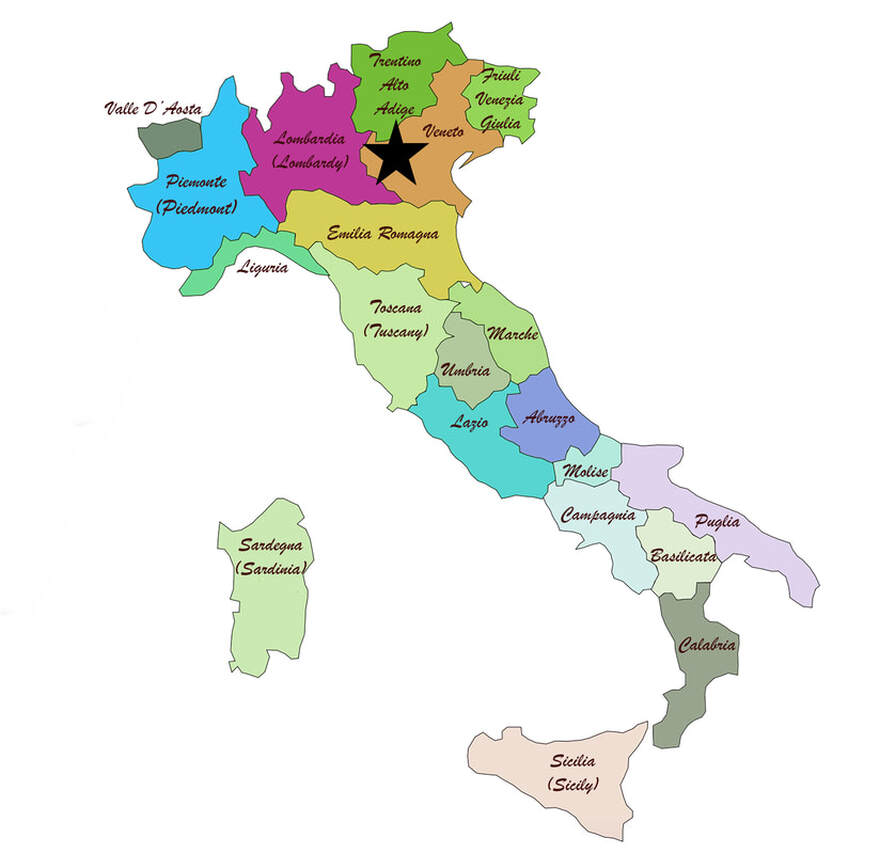 ​Pairs with:  Chicken or chicken salad, antipasto, baked, fried or poached fish, seafood pasta, seafood, shrimp
​
Characteristics:  The Soave wines express as ripe fruit with hat and floral notes and a definitive smoky mineral note.  A well produced version is typically unoaked and displays excellent balance in structure and with aromas and flavors of white blossom, apricot, golden delicious apple and citrus.  They can be complex and age worthy and often exhibit a slightly waxy mouthfeel and almond character on the finish.  The acid is moderate to high and pleasantly integrated with the fruit, especially in single vineyard productions.

​Chardonnay can overpower the white wines if too much is used.  Look for one with lower percentages to enjoy a typical Soave wine.  Soave wines developed a reputation as being inconsistent and often mediocre, however hillside locations and experienced wine makers revitalized the tradition with a focus on quality.

Recioto di Soave style wines are sweet, rich, floral and honeyed.  These wines are made with air dried grapes and botrytis is optional with a trend toward including some botrytized grapes in modern blends.  The grapes are air dried to achieve a minimum potential alcohol of 14%.

Serve: Chilled
​
The key to Soave wines is to recognize the Superiore and DOC versions of the wine.  Superiore is produced from a much smaller are within the Soave DOC and the vines are planted exclusively on hillsides.  Most of the land under vine is all within the Classico area and corresponds to the Recioto di Soave DOCG (a sweet wine made with dried, concentrated grapes). The blending percentages for both regions are the same but the grapes in the Superiore region achieve higher ripeness with limitations on planting density and lower yields.  The Superiore can also be aged until November 1 of the year following harvest and be released as Riserva.  Superiore wines have higher concentration, more structure, higher alcohol and more intense aromas.

​Garganega is one of the oldest white grape varieties in Italy and also one the most storied and important.  Soave wines are produced from this grape and are world famous for their character and style.  Soave wines are not new and are some of the oldest documented wines in Italy and were a world wide sensation in the latter half of the last century.  The earliest known documentation that refers to Garganega comes from the 13th century but it is believed to have been grown in the area for centuries prior.

Garganega is related to Albana, Trebbiano Toscana and Catarratto and has several biotypes (e.g., Grecanico Dorato grown in Sicily).  However, Garganega Tipica is the standard biotype, the most common and the biotype used in Soave wines.   Garganega is a reliable grape in the vineyard and can easily produce relatively high yields.  Quality loss is evident if the vines are left unchecked and careful vineyard practices are used to balance yield and quality.  It ripens late and harvest can commence in September months and easily extend into October.

Veneto's most famous region for white wine is Soave DOC, found near Lake Garda and just east of Verona.  Soave DOC is the highest volume denomination for dry and still wines for all of Italy, not just the Veneto region.  All the denominations are based on the Garganega grape as described above.  Garganega is the primary white grape of the region and produces wines of steely acidity.  Aromas are dominated by floral, citrus and ripe yellow fruits with an underlying tone of almond and mineral.  There is a distinctive flinty mineral tone that can highlight this wine in a blind tasting.

Like many Italian wines, the wine is known for the local city rather than the grape variety.  In this case, the regional name of Soave is the name on the bottle and represents an important and historic area that dates back to the Romans.  The sweet wines that were produced by drying the grapes were the favorite of the Roman army and later became famous during the 6th century as the favorite beverage of Theodoric I, the king of the Visigoths.  Soave is a village based around a 10th century castle that remains connected to medieval walls that surround the historic city center.  The district is north of the much larger city of Verona and is considered to be an extension of Valpolicella as both DOCG regions share the Illasi and Tramigna valleys.

There are two distinct halves of the Soave region with steeper slopes in the west and more limestone in the soil.  The East has lower, volcanic based vineyards that are richer in mineral content and basalt.  Both halves contain bands of alluvial soils. The wines express the soil and terroir uniquely with the Eastern wines showing more structure and intensity.  The elevation ranges from 30 to almost 400 meters and the overall climate is relatively warm in the summer and mildly cold in winter.  Most of the vines are trained in the Pergola fashion as is common in much of the area.  A significant movement to guyot and vertical training is underway.
Producer/Theme websites:
Proudly powered by Weebly