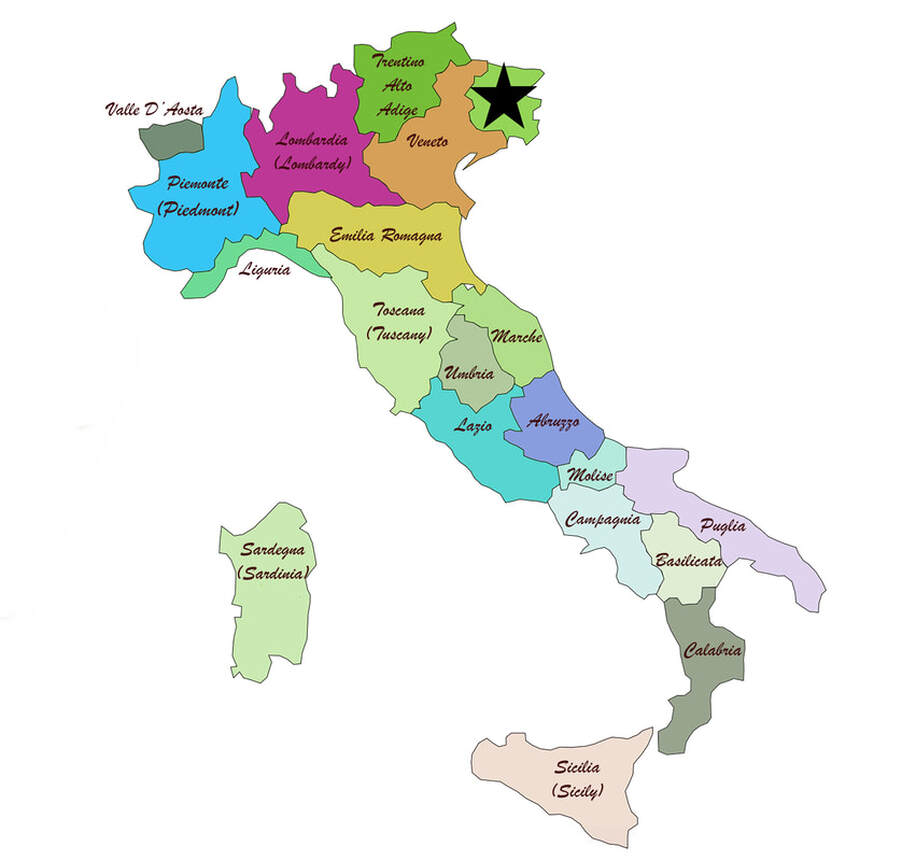 Primary Grape Varietals:  Indigenous Varietal Ribolla Gialla, often used in orange wines.  Very high acid wines produced in varietal levels of 85% or greater Ribolla Gialla.  Can be produced in Riserva style with a minimum of 20 months. Ribolla Nera is not a color mutation of this wine and is better known as Schioppettino.

​Pairs with:  The wine pairs well with antipasti, food and shellfish meals.

Characteristics: The wine is typically floral and fruity with minimal minerality and just a touch of erbacousness, nuttiness and minerality.  The acidity is relatively high and the flavors can be quite intense and complex in spite of the neutral nose.  The floral notes tend to be white flower in nature with some acacia.  The acidity presents itself in citris fruit notes and can have a flavor of hay.
​
Serve: Chilled

​Lets all think Italian Wines for a minute – Sangiovese – Barolo – Aglianico – Prosecco – Name anything you want.  Now name something from Friuli Venezia Giulia that is not a Pinot Grigio.  How about Ribolla Gialla?  This is one of the oldest indigenous grapes in Friuli and thrives on the windy slopes of the Collio Goriziano and Colli Orientali zones.  The earliest notation of Ribolla gialla can be traced back to the 13th century under the name of Rabelais when the Pope was involved in settling a dispute between the Bishop of Trieste and a monastery in Venice.  The dispute was in regard to the selling rights of the wine and was clearly an important asset of the day.  There are many that I believe it is the same grape as the ancient Rebula variety that was brought to Venice by the Greeks but others believe the varietal is indigenous top the border area between Italy and Croatia.  In the 12 thcentury, Friuli was a major producer of wine in the export market that was based in Venice – Called the Republic of Venice and an independent state at that time. Ribolla Gialla wines achieved great popularity under the name of Rabiola del Collio.

Over time, the importance of this wine waned, especially after several battles with mildew reduced the crop and the wine quality.  In another period, the wine was made sweet with still fermenting grapes and served at the Festival of the Dead.  Today, the wine is often dry with colors of straw yellow and green highlights.

Ribolla Gialla is mid-ripening and prefers low fertility soils.  It can be very susceptible to millerandage (no seeds) and the lower yields that result.  Grey rot is another issue with this particular varietal.

The wine is vinified in multiple ways including cement, stainless steel and wood and is sold in still and spumante versions.  The Rosazzo DOCG, formerly a subzone of Colli Orientali del Fruili, includes the grape in their white wines but the percentage is rather small.  The Rosazzo wines are base on Friulano and Sauvignon Blanc. In Collio, the white and red wines are produced as varietals and most are made in Riserva versions.  For a Ribolla Gialla from Collio, the Riserva requires 20 months of aging prior to release.

Varietal wines are typically light bodied and high in acidity but there is a movement toward more concentrated and aromatic styles.