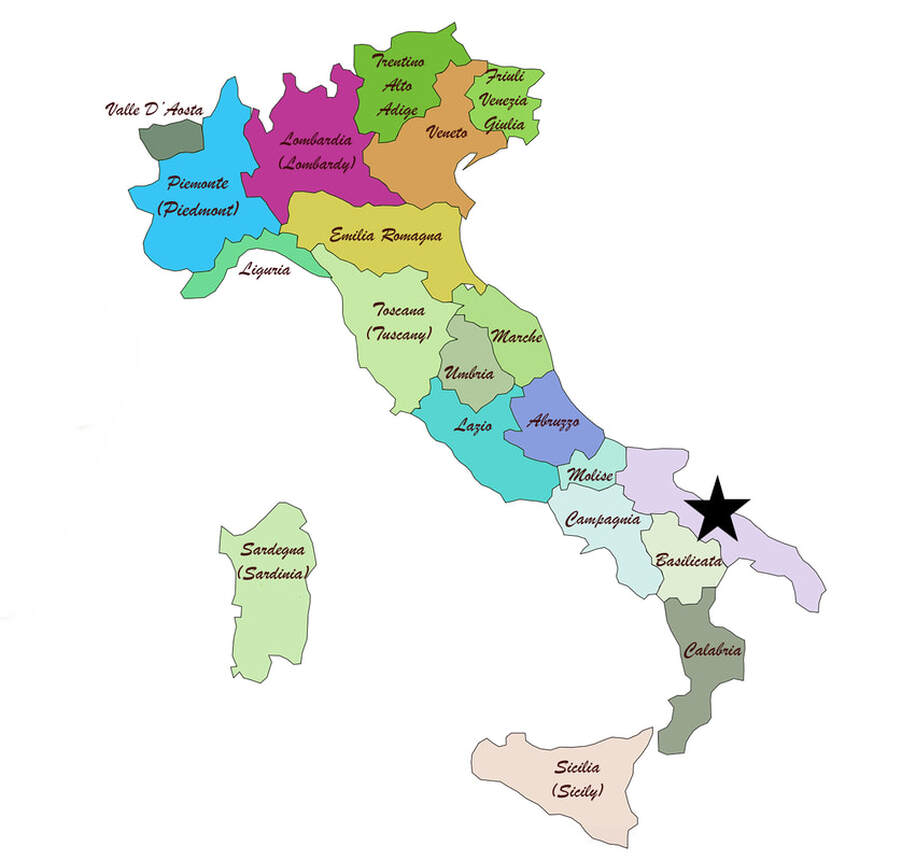 ​The red wines of the Rosso Piceno DOC contain 35-85% Montepulciano and from 15% to 50% Sangiovese with other approved grapes thrown in. An additional 15% of other red grapes can be added to the blends.  While Sangiovese plays an important part by providing acidity and tannin to the final wines, the DOC focuses on Montepulciano as the primary ingredient. Varietal Sangiovese wines are labeled as Rosso Piceno Sangiovese and are allowed under the DOC regulations.

Rosso Conero and Conero make exclusively Montepulciano wines and cover the same acreage.  These regions have produced quality wines since the Roman era.  Conero is considered a CRU of Montepulciano and produces wines entirely focused on the varietal.  DOC/G rules require varietal blends of at least 85% Montepulciano and 15% Sangiovese but most are 100% versions

Offida produces Montepulciano wines but is also well known for the Pecorino and Passerina white wines.  The reds are 85% Montepulciano and can see maturation of to 24 months with half of that in oak and three months in bottle.  Some 100% versions are produced as well as blends of up to 15% Cabernet Sauvignon.

Characteristics:
Rosso Piceno and Offida: The wines are rich with ripe plum and red cherry aromas and flavors, complimented with herbal undertones. A note of shoe polish is an indicator of these wines in a blind tasting.  While these wines have big body and bold flavors, they are not known to age well and should be drunk young.  Be sure to buy a recent vintage.

Rosso Conero and Conero:  The wines are tannic and robust, full bodied, high alcohol and have the ability to age extensively.  The DOC level wines have lower alcohol and are typically a bit fruitier and more approachable in their youth. :

Pair with: The wines are produced for drinking with local food.  In the US they pair well with pizza and hamburgers.
​
Italians say that the Region of La Marche is like finding all of Italy in one region.  It has beaches, mountains, history, food and wine – all that anyone could want to find.

La Marche is also the bridge between the regions where Montepulciano and Sangiovese varietals dominate in Italy and is a land that produces both.  La Marche is the where the two great red grapes of Italy come together on the Adriatic Coast and meet in the middle of the Peninsula.  The Rosso Piceno or just Piceno DOC region is where these two grapes are used to produce red wines of quality and distinction.

Montepulciano has many clones under the name and there is great debate among growers as to which is the better clone.  Pyrazine levels (can give green pepper flavors) are higher in some clones than others while others can be more susceptible to millerandage and the associated lower yields.  In any clone, the grape can be difficult in the vineyard as uneven ripening, late ripening and bitter seeds can be a problem.  The vines are usually trained in the Pergola system in clay soils and performs well in the inland and seaside vineyards

Rosso Piceno was established as a DOC in 1968 (the first DOC of Marche) and produces reds that combine the two grapes in various combinations.  The DOC is second largest in Marche with respect to land under vine and wine production levels.  The DOC covers a very large area with wide variation in soil, altitude, aspect and climate.
Montepulciano adds significant body and richness to the wines.  The wine is high in anthocyanins and therefore is very dark in color.  It is very deep ruby and can have significant purple tones.

Superiore wines are more rare and are produced in only 13 of the most southern towns that are stated to be perfect for grapevine cultivation.  The DOC regulations require a year of age to gain the Superiore on the label. The Superiore subzone  is an official area within the DOC and is known to produce the highest quality wines. The superiore listed on the bottle indicates the grapes were cultivated in the subzone and vinified with higher quality standards. Lower yields, higher potential alcohol and the aging requirement are examples. Superiore wines typically see some oak in the maturation process.

Historically, Marche lagged behind Tuscany and Umbria in terms of reputation but the Rosso Piceno wines have improved and now stand up to the wines of those regions.  Marche enjoys a temperate climate and hillside vineyards that fit well with both varietals.  The area is rather large and covers the provinces of Macerata, Fermo, Ascoli Piceno and Ancona.

The combination of clayish soils, perfect weather conditions, low rain levels and hillside locations, a Piceno Rosso wine is worth finding.  They are on the lower end of price and can easily be found for around $15.  They typically are well balanced with fruit concentration and medium + acid – making it a good combination for Italian pastas, pizza or American food.

Conero DOCG was established as a DOC in 1967 and elevated to DOCG in 2004.  The topography of the area is defined by the spectacular Monte Conero (Monte d’Ancona) which is the highest and one of the most spectacular cliffs of Italy.  The cliff is surrounded by a nature preserve and the vineyards grow adjacent to natural shrubs, pine trees, and many other indigenous plants.  Overall, the area is hilly and coastal and includes the city of Ancona.
Producer/Theme websites:
Proudly powered by Weebly