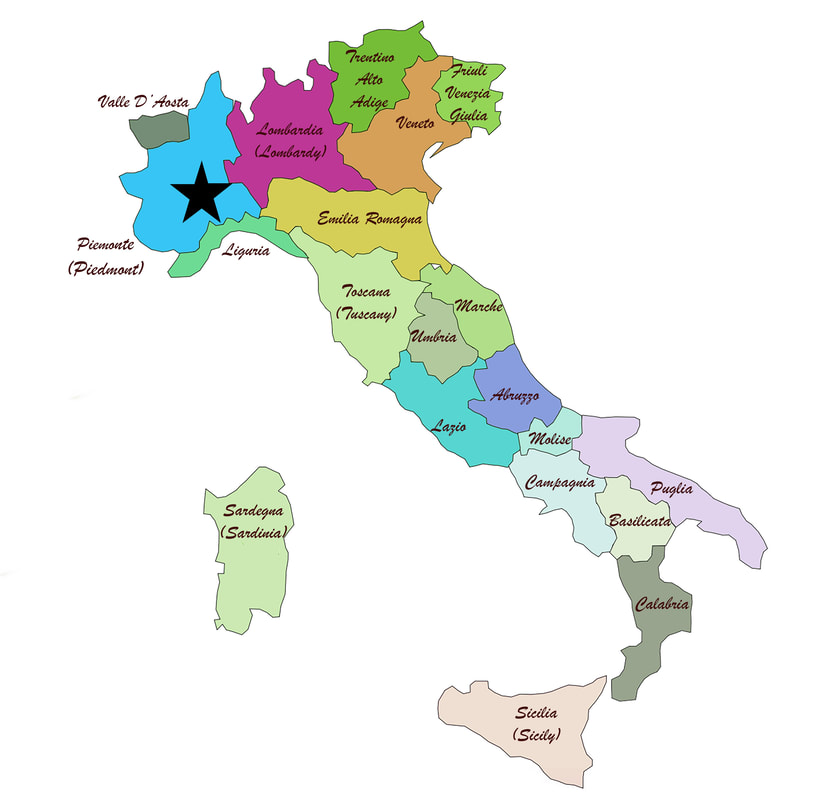 Established: Barolo and Barbaresco established in 1966 as DOC and Elevated to DOCG in 1980.  Barolo has 181 Menzioni and 11 Commune names, Barbaresco has 66 menzioni (areas of additional identification, like CRUs). Barolo and Barbaresco are 100% Nebbiolo with various age requirements, including time on wood.  Remember the 2-3-4-5 rule.  Barbaresco Rosso require 2 years and 4 for Riserva and 9 months on wood.  Barolo is 3 years and 5 years for Riserva with 18 months on barrel.

Ghemme and Gattinara are more northern in Piemonte and established as DOC in 1969; elevated to DOCG in 1997.  Ghemme refers to Nebbiolo as Spanna and wines require 85% with potential blending partners of UVA Rara or Vespolina.  Aging ranges from 34 to 46 months with 6-24 months on wood, depending on the style (Rosso and Riserva).  Gattinara was established as DOC in 1967 and elevated in 1990.  The wines require 90% Nebbiolo with the same potential blending partners and aging requirements of 35 and 47 months with 24 or 36 months on wood for rosso and riserva styles.

Characteristics: The wines are medium depth in color and often have a garnet rim, even in youth.  Nebbiolo has unstable anthocyanins  and are dominated with lighter colored color compounds.  Nebbiolo is considered the king of Italian grapes and is known for its high tannins and acid, which can overpower some palates in youth.  The wines are hauntingly perfumed and exhibit rose petal, tart cherry, sour cherry, sweet spices, tar and dried leaf or herb flavors and aromas.  Most wines are still and dry but some sparkling versions are reaching the market.  The tannins mature over time to become soft and the fruit concentration is deep enough to balance the structure as it ages.  The wines are typically high alcohol.  The wines can be similar to Sangiovese but are far more elegant and sleek.

Barolo/Barbaresco - Some of the most powerful Italian wines and considered to be the most important Italian wine.  High acid, high tannin, age worthy, highly structured, dry wines of character and intensity.  These wines are built on the two pillars of structure in red wines - acidity and tannin.  The tannins are typically felt on the front gums and can be sandy, gritty or grainy.  The wines always finish dry and can be slightly lighter than expected on the mid-palate with a strong focus on the tannin and structure. These wines are hauntingly aromatic.
​
Serve: Room Temperature

Nebbiolo is the king of grapes in Italy and is known all over the world when the names of Barolo or Barbaresco are on the label.  Did you know that Italy has seven important DOCG areas for Nebbiolo?  Each of them takes advantage of the fact that Nebbiolo reflects the microclimate and the location in the final wine – the terrior speaks easily through Nebbiolo.

Nebbiolo is very sensitive to site and can be very vigorous in the vineyard.  Less fertile soils of clay and limestone are ideal for this early budding and very late ripening variety.  Within the continental climate, nebbiolo can be susceptible to spring frosts and autumn rains can impact harvest timing and grape quality.  Significant sunlight and heat is required to manage ripening and anthocyanin (color and tannin) development, therefore Nebbiolo is usually given the southern exposed sites with Barbera and Dolcetto planted nearby.  Global warming could have a dramatic effect on Nebbiolo and is being watched closely.

Nebbiolo has several biotypes with Lampia being the principal one.   Others such as Bolla have lesser quality but are higher yielding and were used more in the past.  A focus on quality has reduced the use of this bio type.

Nebbiolo is famous for its austere tannic structure and the wine must age as it is unapproachable and overpowering in its youth.
Barolo is the most famous style of nebbiolo and the king of italian red wine.  The villages of Barolo and Barbaresco are only 20 minutes apart by car but the soils are quite different.  The softer soils of Barbaresco result in a softer style of wine and they are often referred to as the queen to the Barolo king.

Both wines are Intense and full of character with the flavors mentioned above.  The wines may start with red cherry, rose, violet and underbrush but they develop great complexity over time and flavors of dried fruits, withered and dry rose petals, leather and truffle.  The best of these wines combine an intense aromatic character with a powerful framework for aging.

In the northern part of Piemonte, Gattinara and Ghemme sit in the alpine hills and grow Nebbiolo on the southern slopes.  The microclimate is different between the two DOCG areas but there is some commonality. The climate results in a later harvest than Barolo – a few weeks later, starting in October, Nebbiolo in these regions is ready.  The vineyards are hand picked and the wine is vinified and put in “botte” for at least 2 years.  For Riserva in Gattinara, it sits in barrel for three years and ages almost 4 years in total before release.

Compared to Barolo, Roero or Barbaresco, Gattinara wines are a but more rustic and lack the rose petal notes that can be so obvious in a Barolo.  Much of the flavor profile remains and the minerality kicks in even higher due to the iron rich and acidic nature of the soil. Gattinara has high levels of volcanic soil while Ghemme is more clay based.  This difference alone creates two different wines.

Gattinara blends 90% Nebbiolo with Uva Rara and Vespolina while Ghemme lowers the percentage to 85%. Both regions are known to experiment a bit by maturing some wine in different types and sizes of barrel. They have recently tried maturing some in bottle and blending it after several years for a more complex wine. In any case, the wines are excellent examples of Nebbiolo and the reflect the windy and dry nature of the slopes. The grapes mature slowly and develop into a powerful wine that is drunk with local foods once it is released. The wine is age-worthy and can be set aside for a decade or more but can be drunk immediately.

A Gattinara Nebbiolo is supple on the palate with an elegant nose that tends a bit more to Barbaresco in style but still very different in the end.  They can be found on the market below the prices of Barolo and Barbaresco and can be a great bargain in the $30-40 range.

Moving to Lombardy and the Valtellina DOC, we find ourselves at the base of the Alps that is in a basin of the Adda River and Lake Como.  The valley is home of the Nebbiolo grape – the same grape that is so well known in Piemonte, Barolo, Barbaresco and Roero.  The area is a complex arrangement of lateral valleys, alive with their unique culture and history.  The area is very far north in Italy, where it borders Switzerland and much of the culture is shared between the countries.   The region is relatively small and only stretches about 15 miles around the city of Sondrio.  This is the area where Benito Mussolini proposed making his last stand against the Allied armies but the plan never came to be.

Nebbiolo has a name in different regions – Nebbiolo in Barolo and Spanna in Gattinara.  Here it is Chiavennasca – “the key to birth”. The region is a DOC and DOCG production zone with limitations on vineyard yield, percentage of Nebbiolo used (90%) and aging.  There are three wines made here, each with their own DOC or DOCG designation. Valtellina Rosso is 90% Nebbiolo and a minimum of 6 months of aging.  The superior (DOCG) relies on grapes of 12% minimum alcohol (11% for Rosso) and significantly longer aging.  Superiore requires 2 years with 12 months in barrel and the Riserva version adds a year without a wood exposure requirement.

Sforzato di Valtellina – also known as Sfursat di Valtellina – is another DOCG focused on a red wine made with the “impassimento” method.  The grapes are dried until the potential alcohol level reaches 14% and cannot be vinified until December 1.

Wine is grown here in a similar way to the terraced plots of Mosel in Germany, the Duoro region of Portugal and Alto Adige – another northern region of Italy.  About 80% of the wine produced here is consumed within 100 miles and past agreements required the Swiss to buy a minimum amount of the wine.  When the agreement was ended – many farmers replaced the vineyards with apple trees and nearly ruined the wine industry.  The remaining vineyards are on steep slopes with “Muretti” to hold them in place.  Muro is the Italian word for wall – thus these are little walls that form the wine terraces and are so beautiful in their very nature as to be nominated as a UNESCO World Heritage site.
Producer/Theme websites:
Proudly powered by Weebly