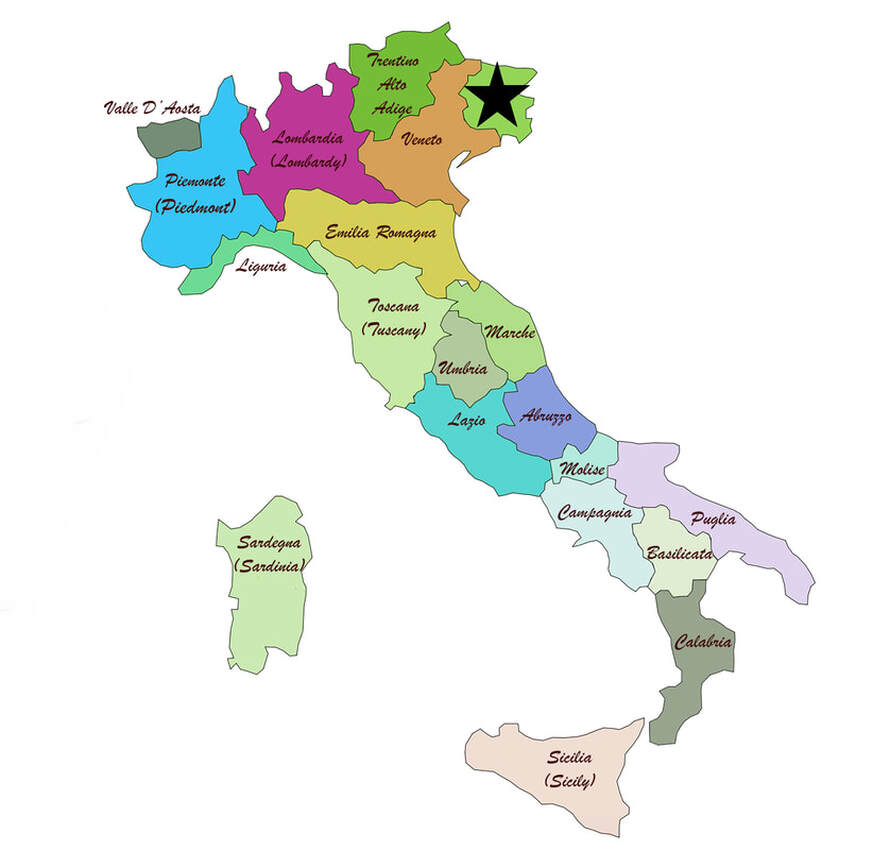 Primary Grape Varietals:  Multiple varietals and wine styles are produced here.  Friulano wines are consistent with other regulations and are at least a varietal blend of 85%

Characteristics:  Friulano is light to medium bodied with grass aromas, white blossom, and green apple.  The wines can also have a herbal or almond note with stone fruit hints.  The best examples have a dense texture.

Serve: Chilled
​
Until recent DNA research clarified its origins, Friulano was believed to have originated in the Friuli region of Italy. It was documented as early as the 12th century and has a long history in the region.  DNA has shown the grape to be the same as Sauvignonasse, a varietal that is native to France and the Gironde.  Despite this finding, Friulano is considered to be a flagship grape and a traditional grape of Friuli.  It is currently the third most planted varietal and the wines are popular locally and beginning to gain traction in International markets.

The history of Friulano is complex and it was primarily used in table wines or as house wines in local eateries.  over the last few decades, the focus on quality has increased and Friulano wines are far more serious than the past.  Leading winemakers such as the late Mario Schiopetto and Livio Felluga were instrumental in the development of quality Friulano wines and established them as a key wine of the region.  Prioto to 2006 the Friulano grape and wines were referred to as Tocai Friulano but Hungary’s Tokaji region and the European Union decided that Friuli Tocai wines must be identified simply as Friulano with the Tocai name reserved for the famous Botrytized wines of Hungary.  The name Friulano means “coming from Friuli” and the new name has been welcomed as representing the bond between the varietal and the region.

Friulano - Sauvigninasse - has also been confused with Sauvignon Blanc in Chile as the two varietals look similar.  This was also driven by the fact that many of the vines were sourced directly from Bordeaux in the 19th century and the chilean winemakers assumed they were planting the more common Sauvignon Blanc.  The key differences include the fact that the wines are less aromatic, lower acid and less likely to age.  The aromas and flavors tended to dissipate after just a few months in the bottle and the aromas lacked any of the methoxypyrazinic notes that are common in S.B.  Friulano also does not perform well if underripe and can easily achieve high ripeness and potential alcohol levels.  The acidity can drop in warmer climates and performs well in the cooler Friuli regions as well as Chile.

Most of the vines have been replanted and Friuli is the real home of this varietal.  In particular, the vineyards of Collio and Colli Oreitnatli produce wines of balance and good acidity.
Producer/Theme websites:
Lis Fadis
Proudly powered by Weebly